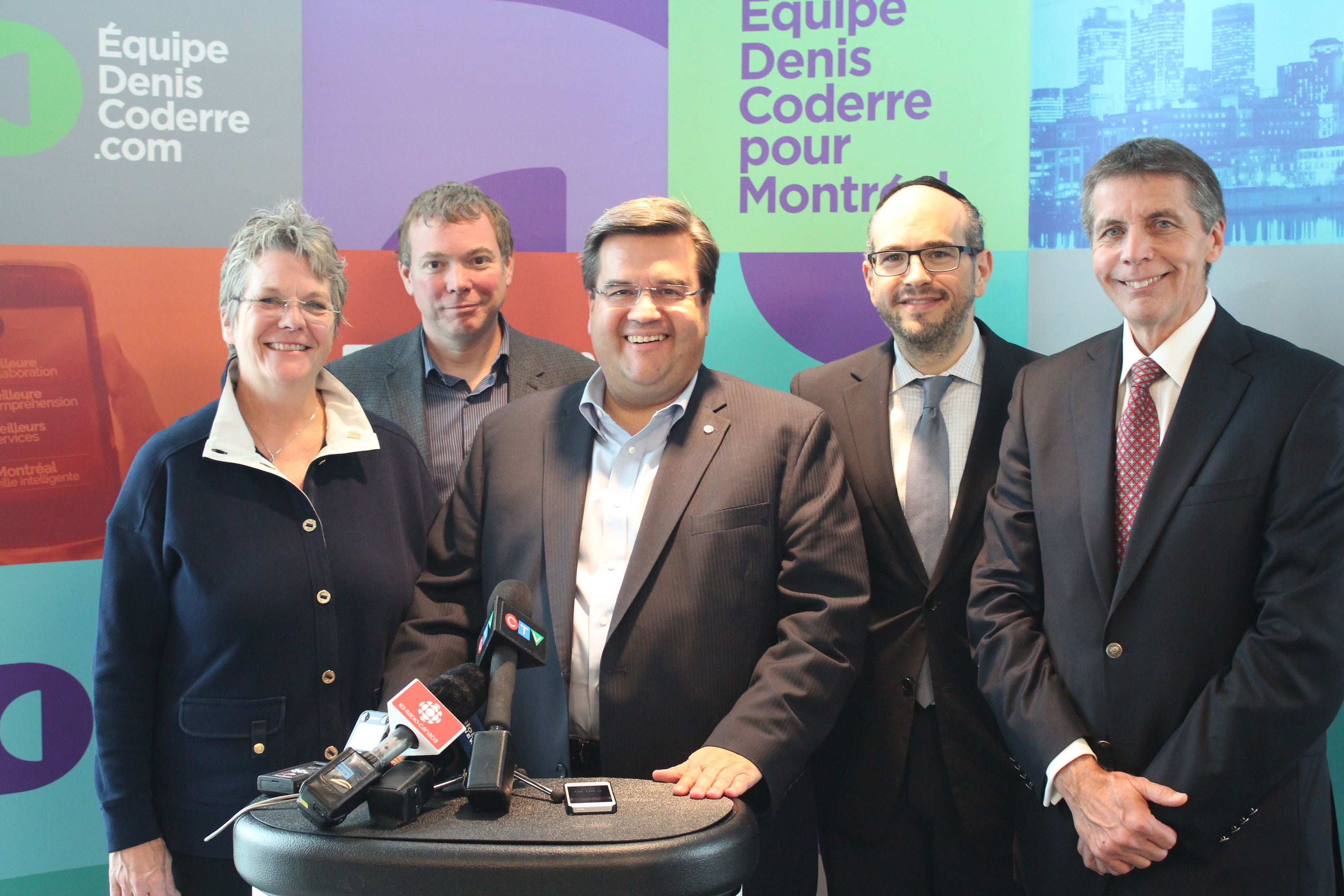 Despite the hundreds of millions of dollars budgeted every year for our roads and underground infrastructure, Montrealers’ lives are continually disrupted by a growing number of breaks and leaks.

A larger budget is not the solution. We need to get better at planning and carrying out the work. This conclusion is supported by remarks made in 2012 by Montreal’s Auditor General, who criticized the City for its lack of control, thoroughness and coordination. Among other things, such organizational shortcomings would explain why only 40% of the maintenance and rebuilding of the City’s major arteries planned for 2010 and 2011 was actually done.

The impasse affecting Montreal's infrastructure is more an issue of efficiency than cost. The low completion rate for maintenance and repair work increases the number of emergency repairs and drives up costs, along with the inevitable collateral damage caused by such emergencies.

COMMITMENT Increase the completion rate of the triennial capital asset plans (CAP) to 80% of annual budgets:

● Establish a coordinating committee composed of public and elected officials who will ensure that sewer and aqueduct work and surface work (roadwork) are correlated and properly coordinated;

● Review the CAP budgets for the boroughs and the city centre at the beginning of the year to achieve higher completion rates;

● Invest the human and financial resources needed to increase the use of internal services over external suppliers.

● Focus on improving sewers and aqueducts using new technologies, such as lining pipes, and stimulate the market to increase the number of bidders and thus reduce costs.

Above and beyond using better work organization to achieve higher completion rates, the municipal apparatus must also innovate and revise its standards. A small market often limits our completion ability and increases costs.

COMMITMENT Find the means to increase our efficiency by competing with the private sector and improve quality standards by developing them internally:

● Pay close attention to the study on the construction of an asphalt plant, which would ensure a competitive market, restore our expertise and eliminate the City’s dependence on a limited number of suppliers;

Due to the size of its population and economy, Montreal plays a key role in the economy of Quebec, and therefore shoulders a large number of responsibilities. For Montreal to fulfill its role in supporting the province’s economic prosperity, the city’s infrastructure must cease to be a barrier to its activities and must instead become a lever.

COMMITMENT Get the higher levels of government to commit to financial assistance for Montreal’s infrastructure projects, in keeping with its status as a metropolis:

● Exert the necessary pressure on the Quebec government to have Montreal’s special status as a Quebec metropolis recognized in the national guide to sustainable municipal infrastructure.

The island of Montreal has a complex network of some 10,000 km of aqueducts and sewers, seven drinking water treatment plants and one sewage treatment plant that draw water, treat it and return it to the surrounding rivers.

An estimated 33% of our water is lost through leaks in the system. The average breakage rate for the secondary water distribution system is 29 per year per 100 km. In addition to dealing with pipes in an advanced state of disrepair, the City must build five large holding ponds and equip its sewage treatment plant with an ozone system.

Most large cities in the world are also dealing with aging infrastructure and will have to invest billions to rectify the situation. This means there is a huge potential market for companies specializing in this type of work.

COMMITMENT Transform investment in water infrastructure into a lever for economic development and business and job creation:

● Add a clear mandate to the Water Department’s mission covering the development and transfer of new water technologies in collaboration with Montreal businesses and local universities;

● Eventually dedicate a percentage of the Water Department’s capital budget to research through a city-university-business partnership such as CREDEAU, and increase this percentage by negotiating the involvement of the two other levels of government;

● Modify calls for tender to allow for technological innovation.

Like other major North American cities such as New York, Boston, Chicago and Toronto, Montreal has grown increasingly aware of the importance of giving access to its shorelines back to citizens. Opening up and improving our access to the river enhances Montrealers’ quality of life by enabling everyone to enjoy the benefits of spending time at the water’s edge and practicing their favorite activities there.

Access to the river is a source of tourist attractions, neighbourhood revitalization and a reputation that could make Montreal famous. Shoreline development initiatives like Antwerp’s floating pool and Budapest’s barge made into a beach are within easy reach for Montreal, the city of design, and would attract the world’s attention. Note that Barge Beach Budapest was built at a cost of only $1.5 million.

From one tip of the island to the other, on the North Shore and on the South Shore, there is a wealth of potential. We need a Blue Plan for the whole island to ensure that efforts are coordinated. The Rivière-des-Prairies—Pointe-aux-Trembles borough’s Blue and Green Plan and the Ahuntsic—Cartierville borough’s Master Plan for the development of the Rivière des Prairies shoreline are examples of what now needs to be done for the entire city.

COMMITMENT Give the shoreline back to Montrealers by increasing the access to the river and enhancing its appeal:

● Negotiate an agreement for the federal government to turn over the land in Montreal’s Old Port and the related budgets, and develop this area for all Montrealers to enjoy;

● Create a Blue Plan for the entire island of Montreal, which would be an action plan that follows up on the survey of Blue Network sites;

● Through design competitions and a ten-year plan, develop a unique, world-caliber concept for each major shoreline access;

● Develop a single signature signage system common to all the shoreline parks so as to create a common thread, a trademark for our network of shoreline parks. This signature would enhance the visibility of the Greater Montreal Blue Route Network, the canoe and kayak route around the island of Montreal with more than 80 landing sites;

● Collaborate in the development of tourism and recreation on Ile Sainte-Thérèse to give Montrealers access to this vast natural environment on the St. Lawrence River;

● Direct the large parks department to prioritize riverbank projects, such as providing access to Ile Lapierre.

Marine tourism represents strong growth potential for riverside cities. Montreal should develop its facilities so as to benefit from potential spinoffs of marine tourism, such as the 500,000 local bathers who leave the area because of a lack of access to the water in Montreal, the 250,000 people who go elsewhere to fish even though the river is teeming with a variety of species, and the 400,000 boaters who face a shortage of moorings.

COMMITMENT Develop our facilities to benefit from the growth of marine tourism in Quebec and the St. Lawrence River’s potential:

● Increase the number of water sport sites around the island of Montreal;

● Increase the number of landing sites;

● Develop the recreational tourism facilities of the water access sites in accordance with the possibilities of each Blue Network site studied;

● Improve the quality of the boat launching ramp infrastructure.

7. An abundance of clean waterways

Among other things, the water strategy adopted by Montreal in 2012 proposed to address the issue of water quality by building holding ponds and equipping the water treatment plant with an ozone treatment system. These plans are already behind schedule. It is critical to remedy this and stay focused on the goal, because swimming areas will soon be found all around the island.

In addition to overseeing quality, Montreal must see to the quantity of river water by playing an important role in bodies such as the International Joint Commission and the Great Lakes and St. Lawrence Cities Initiative.

COMMITMENT Increase the number of swimming areas by addressing the main sources of contamination:

● Create a swimming area at the former Beaudoin Marina in Pointe-aux-Trembles and take the necessary measures to improve water quality, as well as at the Promenade Belle Rive in the borough of Mercier—Hochelaga—Maisonneuve, where water quality is already very good;

● Establish a certificate of compliance for connections required for property sales, so as to gradually phase out cross-connections (a construction defect that causes domestic wastewater to end up in the storm sewer rather than the sanitary sewer);

● Accelerate the construction of the five large holding ponds;

● Ensure that the ozone treatment project at the sewage treatment plant proceeds on schedule.

The city’s paved roads are congested, and meanwhile only ships and pleasure boats take advantage of Montreal’s most beautiful route, the St. Lawrence River. There are many places in the world where people travel to work by boat, but Montreal, an island surrounded by water, has yet to climb on board. With the shipping industry already well established in Montreal, all that is needed is the political will to harness shipping and transportation industry players and come up with viable solutions.

● Follow in the footsteps of many other major cities, including New York, Chicago and Boston, by developing a river shuttle circuit from the eastern part of the island to downtown to improve public transit. In addition, rework the study on a shuttle from the South Shore to involve private industry;

● Increase the number of heritage shuttles for local residents and tourists, from various boroughs;

● In cooperation with the Port of Montreal, increase the number of cruise ship calls;

Email*
Name
Subscribe to the newsletter
Please enter a valid email address.
Your subscription could not be completed.
Thank you for your subscription.